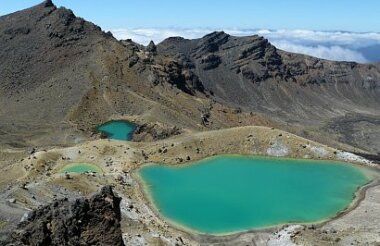 Tongariro is New Zealand's oldest national park, established in 1887 after the Maori chief Te Heuheu Tukino IV gifted the sacred peaks to the nation. It was also only the fourth place on earth to be given recognition as a World Heritage area.

At the heart of the park are three volcanoes, Mount Tongariro, Mount Ruapehu and Mount Ngauruhoe. Mt. Ngauruhoe and Mt. Ruapehu are considered the two most active composite volcanoes in the world with the latter erupting in 1995 and 1996 sending ash up to 30, 000 feet into the air.  In 2012 Mt Tongariro also erupted, but these volcanoes are constantly monitored to ensure visitor safety.

Despite the barren and sometimes inhospitable environment, the region abounds with flora and fauna. Alpine herbs and flaxes thrive on the upper slopes while dense beech forests cover the lower regions. New Zealand's only native mammals, the short and long tailed bat also make their homes here.

The 1 day Tongariro Crossing is one of New Zealand's Great Walks, taking around 6 to 8 hours to complete.  This magnificent walk will take you past the remarkable Emerald and Blue Lakes and through volcanic terrain you won’t see anywhere else in New Zealand. There are many other tracks and trails in the park to suit all abilities, including shorter walks and a guided Tongariro 3.5 day walk. Also lying within the park is New Zealand's largest ski area, Mt Ruapehu Ski Field, encompassing Whakapapa and Turoa.